Abstract: Music is frequently used as a means of relaxation. Conversely, it is used as a means of arousal in sports and exercise contexts. Previous research suggests that tempo is one of the most significant determinants of music-related arousal and relaxation effects. Here we investigate the specific effect of music tempo, but also more generally, the influence of music on human heart rate. We took the pulses of 32 participants in silence, and then we played them non-vocal, ambient music at a tempo corresponding to their heart rates. Finally, we played the same music again, either with the tempo increased or decreased by a factor of 45%, 30%, or 15%; or maintaining the same tempo as in the first playing. Mixed-design ANOVA tests revealed a significant increase in heart rate while listening to the music as compared with silence (p < .05). In addition, substantial decreases in tempo (-45% or -30%) could account for smaller subsequent heart rate reductions (p < .05). We neither found links between increases in tempo (+15%, +30%, and +45%) and heart rate change, nor small decreases (-15%). In addition, neither effects of gender, music training, nor of musical preference were found. This indicates that during passive music listening, music exerts a general arousal effect on human heart rate, which might be regulated by tempo. These results are a major contribution to the way in which music may be used in everyday activities. 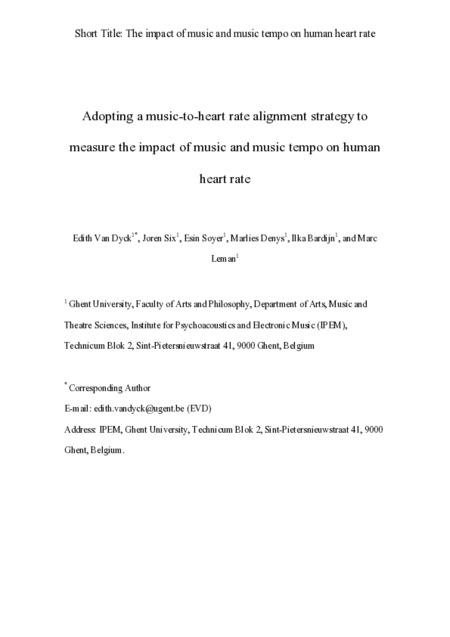