The DSP library for Taros, aptly named TarsosDSP, now includes an implementation of a pitch shifting algorithm (as of version 1.4) and a time stretching algorithm. Combined, the two can be used for something like phase vocoding. With a phase vocoder you can load an audio snippet, change the pitch and duration and e.g. create a library of snippets. E.g. by recording one piano key stroke, it is possible to generate two octaves of samples of different lengths, and use those in stead of synthesized samples. The following example application shows exactly that, implemented in the java programming language.

The example application below shows how to pitch shift and time stretch a sample to create a sample library with the TarsosDSP library. 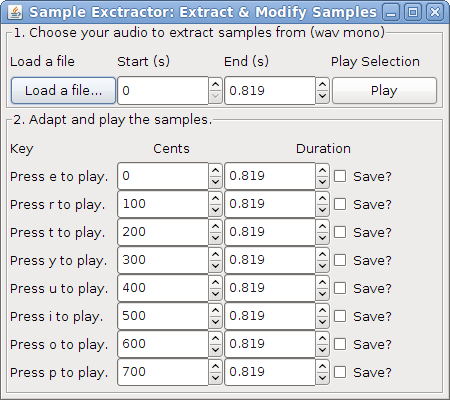 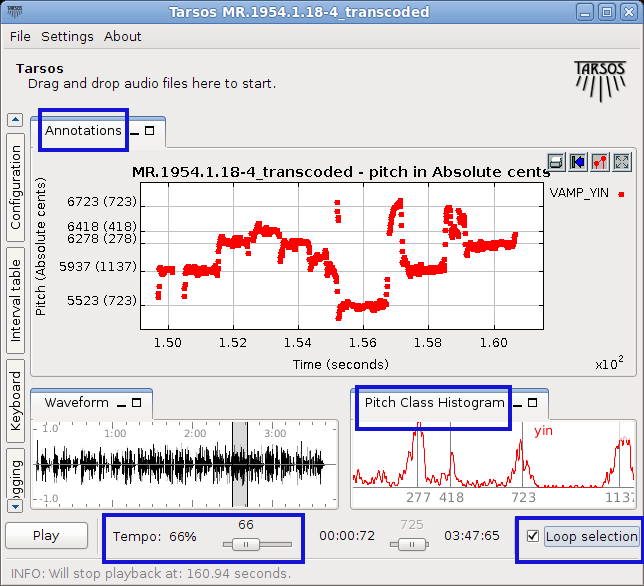 The DSP library for Taros, aptly named TarsosDSP, now includes an implementation of a pitch shifting algorithm (as of version 1.4). The goal of pitch shifting is to change the pitch of a piece of audio without affecting the duration. The algorithm implemented is a combination of resampling and time stretching. Resampling changes the pitch of the audio, but affects the total duration. Consecutively, the duration of the audio is stretched to the original (without affecting pitch) with time stretching. The result is very similar to phase vocoding.

The example application below shows how to pitch shift input from the microphone in real-time, or pitch shift a recorded track with the TarsosDSP library.

To test the application, download and execute the PitchShift.jar file and load an audio file. For the moment only 44.1kHz mono wav is allowed. To get started you can try this piece of audio.

There is also a command line interface, the following command lowers the pitch of in.wav by two semitones.

The resampling feature was implemented with libresample4j by Laszlo Systems. libresample4j is a Java port of Dominic Mazzoni’s libresample 0.1.3, which is in turn based on Julius Smith’s Resample 1.7 library.

After about a year of development and several revisions TarsosDSP has enough features and is stable enough to slap the 1.0 tag onto it. A ‘read me’, manual, API documentation, source and binaries can be found on the TarsosDSP release directory. The source is present in the
What follows below is the information that can be found in the read me file:

TarsosDSP is a collection of classes to do simple audio processing. It features an implementation of a percussion onset detector and two pitch detection algorithms: Yin and the Mcleod Pitch method. Also included is a Goertzel DTMF decoding algorithm and a time stretch algorithm (WSOLA).

Its aim is to provide a simple interface to some audio (signal) processing algorithms implemented in pure JAVA. Some TarsosDSP example applications are available.

The following example filters a band of frequencies of an input file testFile. It keeps the frequencies form startFrequency to stopFrequency.

Quickly Getting Started with TarsosDSP

Head over to the TarsosDSP release repository and download the latest TarsosDSP library. To get up to speed quickly, check the TarsosDSP Example applications for inspiration and consult the API documentation. If you, for some reason, want to build from source, you need Apache Ant and git installed on your system. The following commands fetch the source and build the library and example jars:


When everything runs correctly you should be able to run all example applications and have the latest version of the TarsosDSP library for inclusion in your projects. Also the Javadoc documentation for the API should be available in TarsosDSP/doc. Drop me a line if you use TarsosDSP in your project. Always nice to hear how this software is used.

The source tree is divided in three directories:

The DSP library for Taros, aptly named TarsosDSP, now includes an implementation of a time stretching algorithm. The goal of time stretching is to change the duration of a piece of audio without affecting the pitch. The algorithm implemented is described in An Overlap-add Technique Based On Waveform Similarity (WSOLA) for High Quality Time-Scale Modification of Speech. 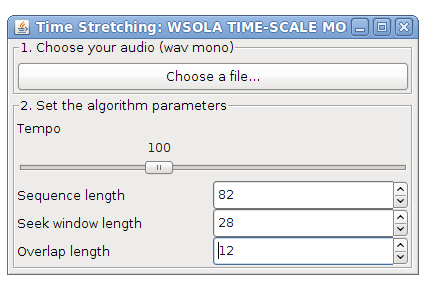 To test the application, download and execute the WSOLA jar file and load an audio file. For the moment only 44.1kHz mono wav is allowed. To get started you can try this piece of audio.

There is also a command line interface, the following command doubles the speed of in.wav:

The source code of the Java implementation of WSOLA can be found on the TarsosDSP github page.