The 21st of October a demo of PeachNote Piano was given at the ISMIR 2011 conference. The demo raised some interest.

The extended abstract about PeachNote Piano can be found on the ISMIR 2011 schedule.

A previous post about PeachNote Piano has more technical details together with a video showing the core functionality (quasi-instantaneous USB-BlueTooth-MIDI communication). 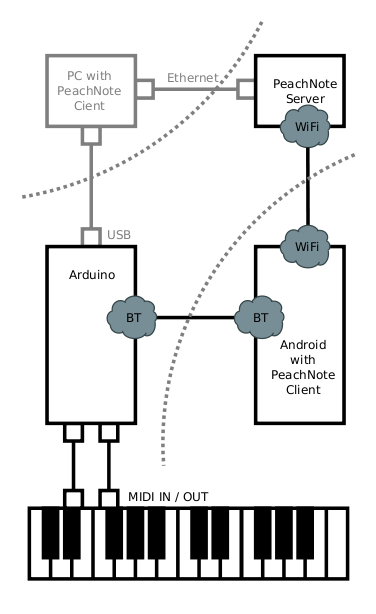 The extended abstract about PeachNote Piano has been accepted as a demonstration presentation to appear at the ISMIR 2011 conference in Miami. To know more about PeachNote Piano come see us at our demo stand (during the Late Breaking and Demo Session) or read the paper: Peachnote Piano: Making MIDI instruments social and smart using Arduino, Android and Node.js. What follows here is the introduction of the extended abstract:

Playing music instruments can bring a lot of joy and satisfaction, but not all apsects of music practice are always enjoyable. In this contribution we are addressing two such sometimes unwelcome aspects: the solitude of practicing and the “dumbness” of instruments.

The process of practicing and mastering of music instruments often takes place behind closed doors. A student of piano spends most of her time alone with the piano. Sounds of her playing get lost, and she can’t always get feedback from friends, teachers, or, most importantly, random Internet users. Analysing her practicing sessions is also not easy. The technical possibility to record herself and put the recordings online is there, but the needed effort is relatively high, and so one does it only occasionally, if at all.

Instruments themselves usually do not exhibit any signs of intelligence. They are practically mechanic devices, even when implemented digitally. Usually they react only to direct actions of a player, and the player is solely responsible for the music coming out of the insturment and its quality. There is no middle ground between passive listening to music recordings and active music making for someone who is alone with an instrument.

We have built a prototype of a system that strives to offer a practical solution to the above problems for digital pianos. From ground up, we have built a system which is capable of transmitting MIDI data from a MIDI instrument to a web service and back, exposing it in real-time to the world and optionally enriching it.

A previous post about PeachNote Piano has more technical details together with a video showing the core functionality (quasi-instantaneous USB-BlueTooth-MIDI communication). Some photos can be found below.

This is about PeachNote Piano, a project only tangentially related to Tarsos. PeachNote Piano aims to capture as many piano practice sessions as possible and offer useful services using this data. The system does this by capturing and redirecting MIDI events on a Bluetooth enabled smartphone. It is done together with Vladimir Viro and builds on the existing PeachNote infrastructure.

The schema – right – shows the components of the PeachNote Piano system. At the bottom you have a MIDI keyboard connected to the MIDI-Bluetooth-bridge. A smartphone (middle left) receives these MIDI events via Bluetooth and controls the communication to the server (top left). An alternative path goes through a standard computer (top right).

The Arduino based Bluetooth to MIDI bridge is an improvement on the work by Peter Brinkmann. The video below shows communication between USB-MIDI, Bluetooth MIDI and MIDI IN/OUT ports.

As an example application of the PeachNote Piano system we implemented a “Continue a Melody” service which works as follows: a user plays something on a keyboard, maybe just a few notes, and pauses for a few seconds. In the meantime, the server searches through a large database of MIDI piano recordings, finds the longest fuzzy match for the user’s most recent input, and, after a short silence on the users part, starts streaming the continuation of the best matched performance from the database to the user. This mechanism, in fact, is way of browsing a music collection. Users may play a known leitmotiv or just improvise something, and the system continues playing a high quality recording, “replying” to the musical proposition of the user.

The melody matching is done on the server, which is implemented in Javascript in the Node.js framework. The whole dataset (about 350 hours of piano recordings) resides in memory in two representations: as a sequence of pitches, and as a sequence of “densities” at the corresponding places of the pitch sequence dataset. This second array is used to store the rough tempo information (number of notes per second) absent in the pitch sequence data.
By combining the two search criteria we can achieve reasonable approximation of the tempo-aware search without its computational complexity.

The implementation of the hardware is based on the open-source electronic prototyping platform Arduino. Optocoupled MIDI ports (IN/OUT) and the BlueSMiRF Bluetooth module were attached to the main board, as can be seen in the middle left block of the schema. The BlueTooth module is configured to use the Serial Port Profile (SPP) which emulates RS-232. The software on the Arduino manages bi-directional, low latency message passing between three serial ports: USB (through an FTDI chip), BlueTooth and the hardware MIDI-IN and OUT port.

The standard Arduino firmware has been replaced with firmware that implements the “Universal Serial Bus Device Class Definition for MIDI Devices”: when attached to a computer via USB, the Arduino shows up as a standard MIDI device, which makes it compatible with all available MIDI software. The software client currently works on the Android smartphone platform. It is represented using the middle right block in the schema. The client can send and receive MIDI events over its Bluetooth port. Pairing, connecting and communicating with the device is done using the Amarino software library. The client communicates with the Peachnote Piano server using TCP sockets implemented on the Dalvik Java runtime.