Abstract: Music is believed to work as a bio-social tool enabling groups of people to establish joint action and group bonding experiences. However, little is known about the quality of the group members’ interaction needed to bring about these effects. To investigate the role of interaction quality, and its effect on joint action and bonding experience, we asked dyads (two singers) to perform music in medieval “hocket” style, in order to engage their co-regulatory activity. The music contained three relative inter-onset-interval (IOI) classes: quarter note, dotted quarter note and eight note, marking time intervals between successive onsets (generated by both singers). We hypothesized that singers co-regulated their activity by minimizing prediction errors in view of stable IOI-classes. Prediction errors were measured using a dynamic Bayesian inference approach that allows us to identify three different types of error called fluctuation (micro-timing errors measured in milliseconds), narration (omission errors or misattribution of an IOI to a wrong IOI class), and collapse errors (macro-timing errors that cause the breakdown of a performance). These three types of errors were correlated with the singers’ estimated quality of the performance and the experienced sense of joint agency. We let the singers perform either while moving or standing still, under the hypothesis that the moving condition would have reduced timing errors and increased We-agency as opposed to Shared-agency (the former portraying a condition in which the performers blend into one another, the latter portraying a joint, but distinct, control of the performance). The results show that estimated quality correlates with fluctuation and narration errors, while agency correlates (to a lesser degree) with narration errors. Somewhat unexpectedly, there was a minor effect of movement, and it was beneficial only for good performers. Joint agency resulted in a “shared,” rather than a “we,” sense of joint agency. The methodology and findings open up promising avenues for future research on social embodied music interaction. 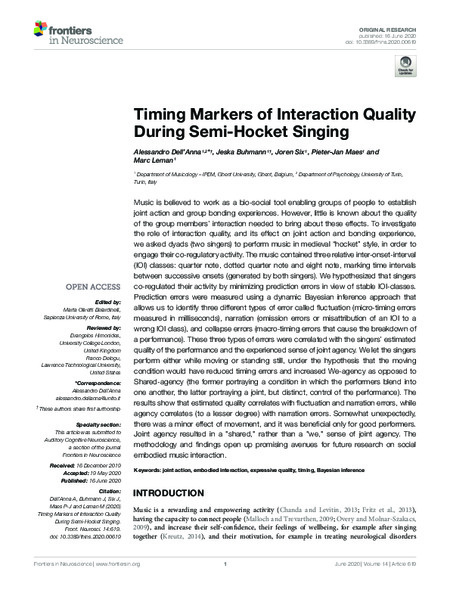