This post documents how to implement a simple music quiz with the meta data provided by Spotify and a big red button.

During my last birthday party, organized at Hackerspace Ghent ,there was an ongoing Spotify music quiz. The concept was rather simple: If music that was playing was created in the same year as I was born, the guests could press a big red button and win a price! If they guessed incorrectly, they were publicly shamed with a sad trombone. Only one guess for each
song was allowed.

Below you can find a small videograph which shows the whole thing in action. The music quiz is simple: press the button if the song is created in 1984. In the video, at first a wrong answer is given, then a couple of invalid answers follow. Finally a good answer is given, the song “The Killing Moon by Echo & the Bunnymen” is from 1984! Woohoo!

Allright, what did I use to to implement the spotify music quiz:

A nice big red button, which main features are that it is red and big, serves as the main input device for the quiz. To be able to connect the salvaged safety button to a computer via USB, an Arduino Nano is used. The Arduino is loaded with the code from the debounce tutorial, basically unchanged. Unfortunately, I could not fit the the FTDI-chip, which provides the USB connection, in the original enclosure. An additional enclosure, the white one seen in the pictures below, was added.

When pressed, the button sends a signal over the serial line. See below how the Ruby Quiz script waits for, and handles such event.

Get Meta Data from the Currently Playing Song in Spotify

Another requirement for the quiz to work is the ability to get information about the song currently playing in Spotify. On Linux this can be done with the dbus interface for Spotify. The script included below returns information about the artist, album and title of the song. It also detects if Spotify is running or not. Find it, fork it, use it, on github

On Mac OS X, Spotify can be controlled using AppleScript. A script on github shows how to get meta data about the currently playing song in Spotify, on Mac OS X.

With the individual part in order, we now need Ruby glue to paste it all together. The complete music quiz script can be found on github. The main loop, below, waits for a button press. If it is pressed the sad trombone, invalid answer or winner sound is played. The sounds are attached to this post.

The DSP library for Taros, aptly named TarsosDSP, now includes an example demonstrating the flanging audio effect. Flanging, essentialy mixing the signal with a varying delay of itself, produces an interesting interference pattern. 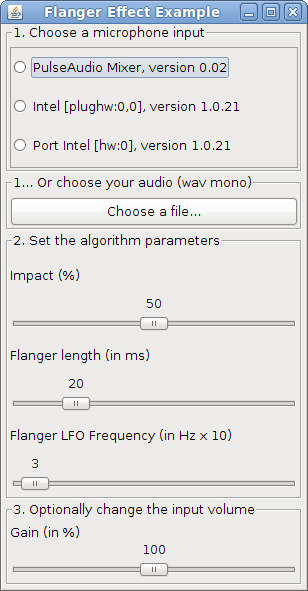 The flanging example works on wav-files or on input from microphone. Try it yourself, download
Flanging.jar, the executable jar file. Below you can check what flanging sounds like with various parameters.

The source code of the Java implementation can be found on the TarsosDSP github page.