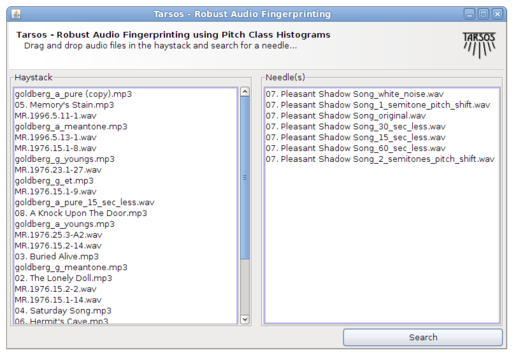 Unfortunately I do not have time for rigorous testing (by building a large acoustic fingerprinting data set, or an other decent test bench) but the idea seems to work. With the following modifications, done with audacity effects the needle was still found a hay stack of 836 files :

The following modifications failed to identify the correct song:

The original was also found. No failure analysis was done. The hay stack consists of about 100 hours of western pop, the needle is also a western pop song. If somebody wants to pick up this work or has an acoustic fingerprinting data set or drop me a line at .

The source code is available, as always, on the Tarsos GitHub page.