Tarsos can be used to render MIDI files to audio (WAV) files using arbitrary tone scales. This functionallity can be used to (automatically) verify tone scale extraction from audio files. Since I could not find a dataset with audio and corresponding tone scales creating one using MIDI seemed a good idea.

MIDI files can be found in spades, tone scales on the other hand are harder to find. Luckily there is one massive source, the Scala Tone Scale Archive: A large collection of over 3700 tone scales.

Using Scala tone scale files and a midi files a Tone Scale – Audio dataset can be generated. The quality of the audio depends on the (software) synthesizer and the SoundFont used. Tarsos currently uses the Gervill synthesizer. Gervill is a pure Java software synthesizer with support for 24bit SoundFonts and the MIDI tuning standard.

How To Render MIDI Using Arbitrary Tone Scales with Tarsos

A recent version of the JRE needs to be installed on your system if you want to use Tarsos. Tarsos itself can be downloaded in the form of the Tarsos JAR Package.

Currently Tarsos has a Command Line Interface. An example with the files you can find attached:

The result of this command should yield an audio file that sounds like the cello suites of bach in a nonsensical tone scale with steps of 120 cents. Executing tone scale extraction on the generated audo yields the expected result. In the pich class histogram every 120 cents a peak can be found.

To summarize: by rendering audio with MIDI and Scala tone scale files a dataset with tone scale – audio information can be generated and tone scale extraction algorithms can be tested on the fly.

This method also has some limitations. Because audio is rendered there is no (background) noise, no fluctuations in pitch and timbre,… all of which are present in recorded audio. So testing testing tone scale extraction algorithms on recorded audio remains advised.

Tarsos is now capable of reproducing speech using MIDI. The idea to convert speech into MIDI comes from the blog of Corban Brook where the following video can be found, actually a work by Peter Ablinger:

Another example of music inspired by speech is this interview with Louis Van Gaal:

Tarsos sends out midi data based on an FFT analysis of the signal. It maps the spectrogram to MIDI Messages and uses the power spectrum to calculate the velocity of each note on message.

The implementation can run in real-time but the output has some delay: the FFT calculation, constructing MIDI messages, calculating velocity, synthesizing sound, … is not instantaneous.

To use this capability Tarsos supports the following syntax. If a MIDI file is given the MIDI messages are written to the file. If an audio file is given Tarsos uses the audio as input. If the --pitch switch is used only the F0 is considered to construct MIDI messages instead of a complete FFT.

Tarsos can be used to search for music that uses a certain tone scale or tone interval(s). Tone scales can be defined by a Scala tone scale file or an exemplifying audio file. This text explains how you can use Tarsos for this task. 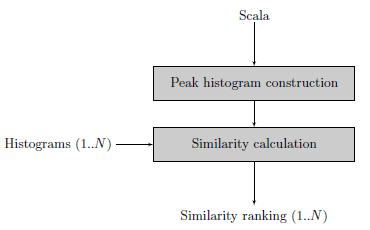 Scala files are text files with information about a tone scale. It is used to share and exchange tone scales. The file format originates from the Scala program :

The Scala file format is popular because there is a library with more than 3000 tone scales available on the Scala website.

An example should make things clear. Lets search for an interval of 300 cents or exactly three semitones. A scala file with this interval is easy to define:

This example only uses scala files, creating histograms is actually not needed: calculating intervals can be done using the scala file itself. This changes when audio files are compared with each other or with scala files. 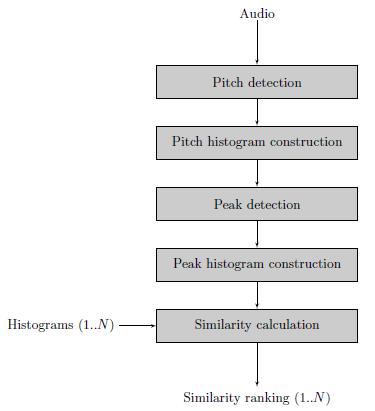 When audio files are fed to the algorithm additional steps need to be taken.

The last two steps are the same for audio files or scala files.

Using real audio files can cause dirty histograms. Determining how many distinct pitch classes are used is no trivial task, even for an expert (human) listener. Tarsos should provide a semi-automatic way of peak extraction: a best guess by an algorithm that can easily be corrected by a user. For the moment Tarsos does not allow manual intervention.

To use tarsos you need a recent java runtime (1.6) and the following command line arguments:

This post is about the tools I use to keep the source code of Tarsos reasonably clean, consistent and readable. Static code analysis can be of great help if you want to maintain strict coding standards and follow language idioms. Some of the patterns they can detect for you:

And even more subtle, but equally important:

In a previous life I used .NET and the static code analysis tools FxCop & StyleCop. FxCop operates on bytecode (or intermediate language in .NET parlance) level, StyleCop analyses the source code itself. Tarsos uses JAVA so I looked for JAVA alternatives and found a few.

On freesoftwaremagazine.com there is an article series on JAVA static code analysis software. It covers PMD and FixBugs and integration in Eclipse. It does not cover Checkstyle. Checkstyle is essentialy the same as PMD but it is better integrated in eclipse: it checks code on save and uses the standard ‘Problems’ interface, PMD does not.

To fix problems Eclipse save actions can save you some time. IBM has an article on how to keep your code clean using Eclipse.

Another tip is a more philosophical one: making your code and code revisions publicly available makes you think twice before implementing (and subsequently publishing) a quick and dirty hack. Tarsos is available on github.