~ Olaf - Acoustic fingerprinting on the ESP32 and in the Browser 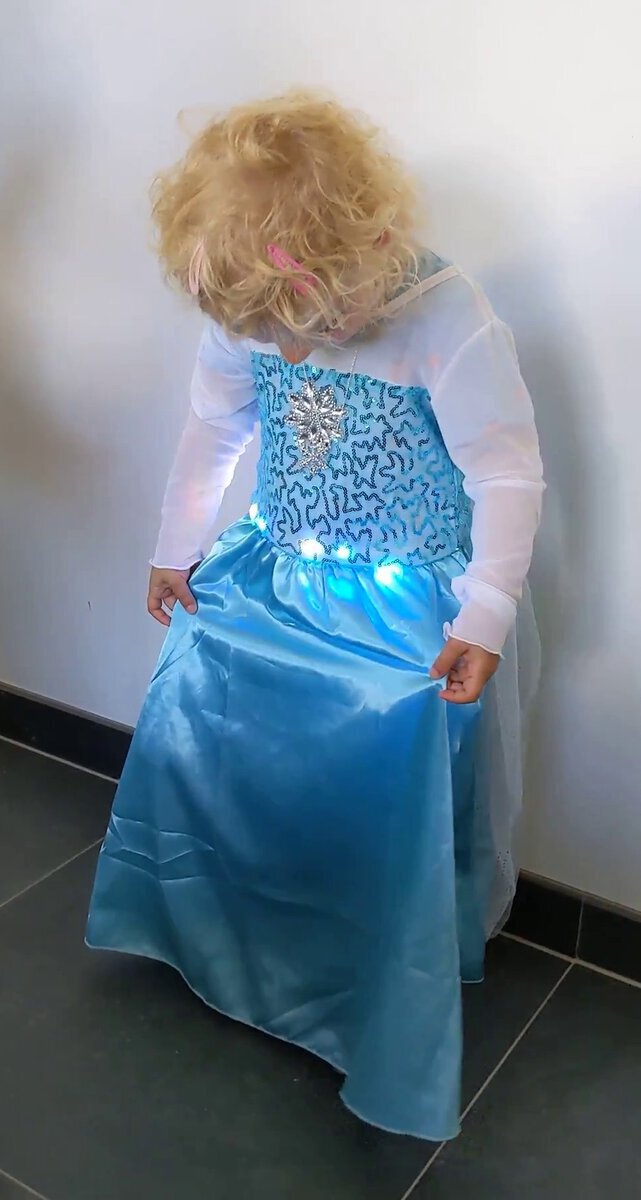 A good year ago I was asked to develop audio recognition technology for an e-costume. The idea was that lights in the costume would follow a sequence synchronised to a certain song. Only a single song should trigger the lights, all other music should be ignored. Recognition of music and synchronisation is typically done using audio fingerprinting techniques. The challenge was that the recognition needed to run on a cheap, battery-powered microcontroller with limited CPU and memory. I delivered a prototype but eventually a cheap, battle-tested, off-the-shelf, IP-cleared, alternative was found.

The prototype gathered dust for a while but the idea stuck in my head. With my daughters fourth birthday approaching during the lockdown, I decided to turn the prototype into an over-engineered birthday gift and let an ‘Elsa-dress’ react to ‘Let It Go’ from the Frozen soundtrack. With the prototype as a starting point, I ordered an RGB-LED-strip, a beefy Li-Ion Battery, an I2S digital microphone and, of course, an Elsa-dress.

I had an ESP32 microcontroller laying around and used it as the core of the system: it supports I²S, has a floating point unit (FPU), is easy to use together with LED strips and has enough memory. The FPU makes it straightforward to use the same code on traditional computers as on embedded devices: fixed-point math can be avoided.

After soldering the components together and with the help from my better half to sew in the LED strip, it all came together. In the video below, the result of our work can be seen. The video first shows a song that should not and is not recognised. Then, “Let It Go” is played and correctly recognised. After the song is stopped, the lights go on for a while and finally stop: this is by design to allow gaps in recognition. Lastly, the song is continued and again correctly recognised.

With my limited C experience the prototype code was not well organised. During my second attempt this improved enough so that I feel comfortable enough to share the code on GitHub: Olaf – Overly Lightweight Acoustic Fingerprinting.

The code went through several iterations and was expanded beyond the original scope and became a capable general purpose acoustic fingerprinting system with its many applications. Olaf performs quite well thanks to its resource friendly design and the use of PFFT and LMDB. Especially LMDB, a fast, B+-tree backed key value store with low storage overhead enables performant storage and lookups.

The GitHub does not contain an example for the ESP32. That code depends on the microcontroller, digital microphone and pins used and Olaf needs to be hacked to exhibit the requested behaviour. All in all that code is much less reusable (and sharable, testable, maintainable). I have, however, included a platformIO project for Olaf on ESP32 for reference.

WASM: Olaf in the browser

Olaf, being written in ANSI C, can run in the browser thanks to the Emscripten compiler. According to its website, Emscripten ‘…lets you run C and C++ on the web at near-native speed without plugins’ Combining the Web Audio API and the WASM version of Olaf makes web-based acoustic fingerprinting applications possible.

Below you can try out Olaf. The exact same code is running on your browser as on the ESP32 demonstrated above. This means that Olaf is listening to recognise ‘Let It Go’ from the Frozen soundtrack. For your convenience the song can be started below on the left. On the right, you can start Olaf by allowing incoming audio to be analysed. The FFT is calculated by Olaf and visualised using Pixi.js. After a few seconds the red fingerprints should become green, indicating a match. Once you stop the song, the fingerprints will eventually turn red again. As with the video above: going from a match to no match takes a couple of seconds to allow gaps in recognition.

1. Start the song and play it aloud. Singing along is encouraged. 2. Start the microphone and check whether recognition succeeds.

Olaf was featured on hackaday. There is also a small discussion about Olaf on Hacker News. A write-up of this project also ended up as a contribution to the Late Breaking Demo track of the first virtual ISMIR conference: Olaf ISMIR 2020 LBD abstract.