~ Decode MP3s and other Audio formats the easy way on Android

This post describes how to decode MP3’s using an already compiled ffmpeg binary on android. Using ffmpeg to decode audio on Android has advantages:

The main disadvantage is that you need an ffmpeg build for your Android device. Luckily some poor soul already managed to compile ffmeg for Android for several architectures. The precompiled ffmpeg binaries for Android are available for download and are mirrored here as well.

To bridge the ffmpeg binary and the java world TarsosDSP contains some glue code. The AndroidFFMPEGLocator is responsible to find and extract the correct binary for your Android device. It expects these ffmpeg binaries in the assets folder of your Android application. When the correct ffmpeg binary has been extracted and made executable the PipeDecoder is able to call it. The PipeDecoder calls ffmpeg so that decoded, downmixed and resampled PCM samples are streamed into the Java application via a pipe, which explains its name.

With the TarsosDSP Android library the following code plays an MP3 from external storage:

This code just works if the application has the READ_EXTERNAL_STORAGE permission, includes a recent TarsosDSP-Android.jar, is ran on one of the supported ffmpeg architectures and has these binaries available in the assets folder.

This post describes a tool to quickly visualize and record analog signals with a Teensy micro-controller and some custom software. It is mainly useful to quickly get an idea of how an analog sensor reacts to different stimuli. Since it is also able to capture and store analog input siginals it is also useful to generate test data recordings which then can be used for example to test a peak detection algorithm on. The tool is called TeensyDAQ hinting at the Data AcQuisition features and the micro-controller used.

Some of the features of the TeensyDAQ:

The system consists of two parts. A hardware and a software part. The hardware is a Teensy micro-controller running an Arduino sketch that ready analog input A0 to A4 at the requested sampling rate. A Teensy is used instead of a regular Arduino for two reasons. First the Teensy is capable of much higher data throughput, it is able to send five reading at 8000Hz, which is impossible on Arduino. The second reason is the 13bit analog read resolution. Classic Arduino only provides 10 bits.

The software part reads data from the serial port the Teensy is attached to. It interprets the data and stores it in an efficient data-structure. As quickly as possible the data is visualized. The software is written in Java. A recent Java runtime environment is needed to execute it.

Try out the latest version of TeensyDAQ or check out the source code on the github TeensyDAQ source repository.

~ TarsosDSP featured in EFY Plus Magazine 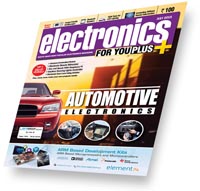 TarsosDSP, the is a real-time audio processing library written in Java, is featured in EFY Plus Magazine of July 2015. It is a leading electronics magazine with a history going back more than 40 years and about 300 000 subscribers mainly in India. The index mentions this:

To read the full article, buy a (digital) copy of the magazine.